Subscribe me to amaB's email newsletter to get stories and announcements as they break.

The state alleges that a 36-year-old Twitter influencer was one of the instigators that ignited widespread unrest and looting in July.

Know more?
Send us a tip off
30 August 2021 - AmaBhungane Reporters

*The original version of this story used photos from a Facebook profile. We have since been alerted that a different person appeared in court so we have removed those photographs. We apologise for the error.

Zamaswazi Majozi appeared in the Germiston magistrate’s court on Monday, charged with using her social media accounts to incite violence. 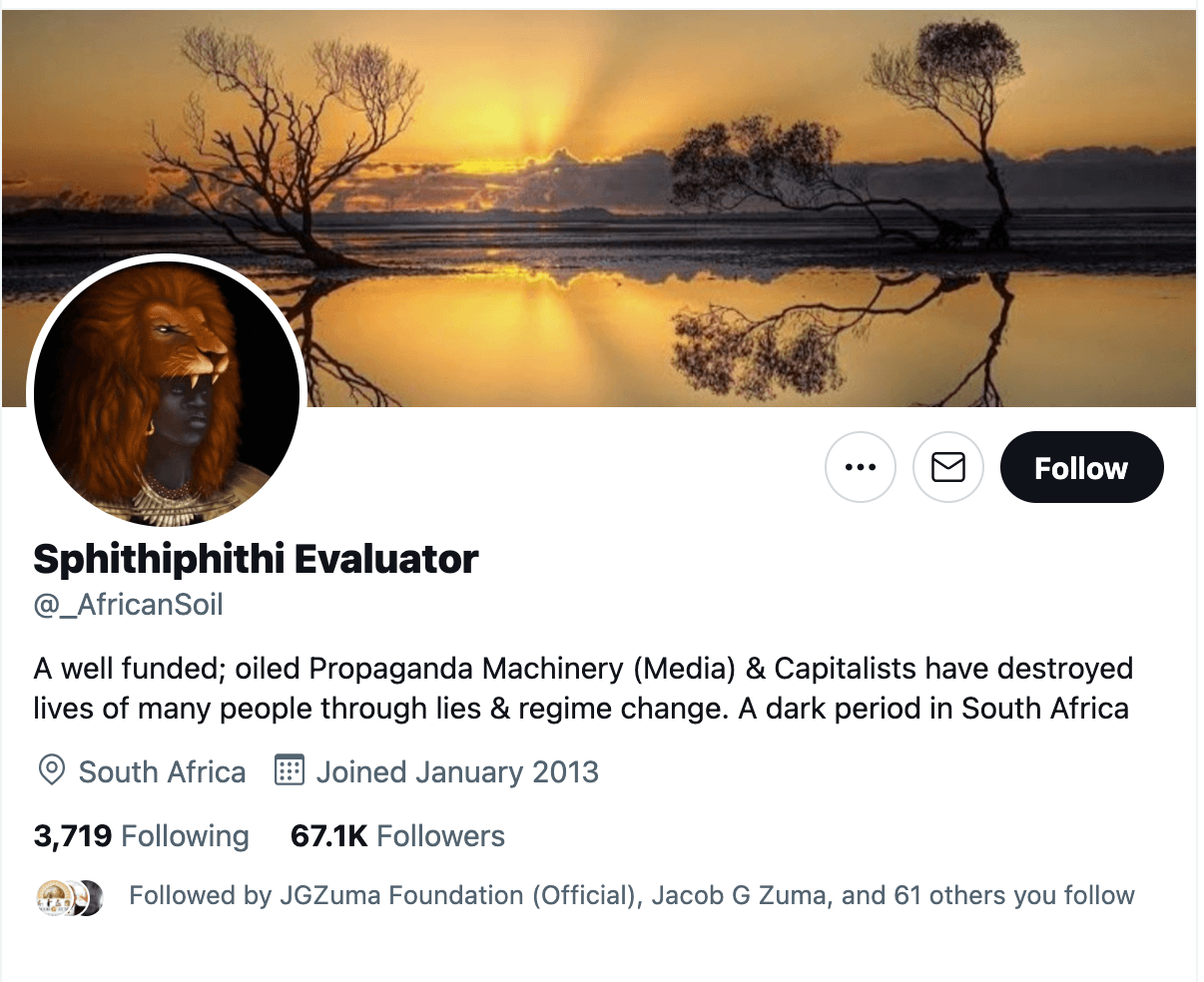 According to a statement issued by Directorate for Priority Crime Investigation (the Hawks), Majozi is alleged to have circulated content “which resulted in the looting and burning that occurred at Brookside Mall in Pietermaritzburg, KwaZulu-Natal”.

The account is a leading voice in the Radical Economic Transformation (RET) political faction, and has used Twitter anonymously to defend former president Jacob Zuma and fiercely attack his critics.

A Facebook profile appears to show that she previously worked for FNB before starting her own marketing and communications business. This is confirmed by company and other online records for Majozi.

There is, however, little indication of Majozi’s political alter ego on this account – and the Facebook page features pictures that do not appear to be the same person as appeared in court.

Either she keeps her political views well-hidden or she could have sold the account after creating it, meaning that someone else entirely might control the content.

When amaBhungane contacted her father, he sounded shocked and said he knew nothing about the arrest, adding that, “Zama is not that kind of person she will never get into trouble.” 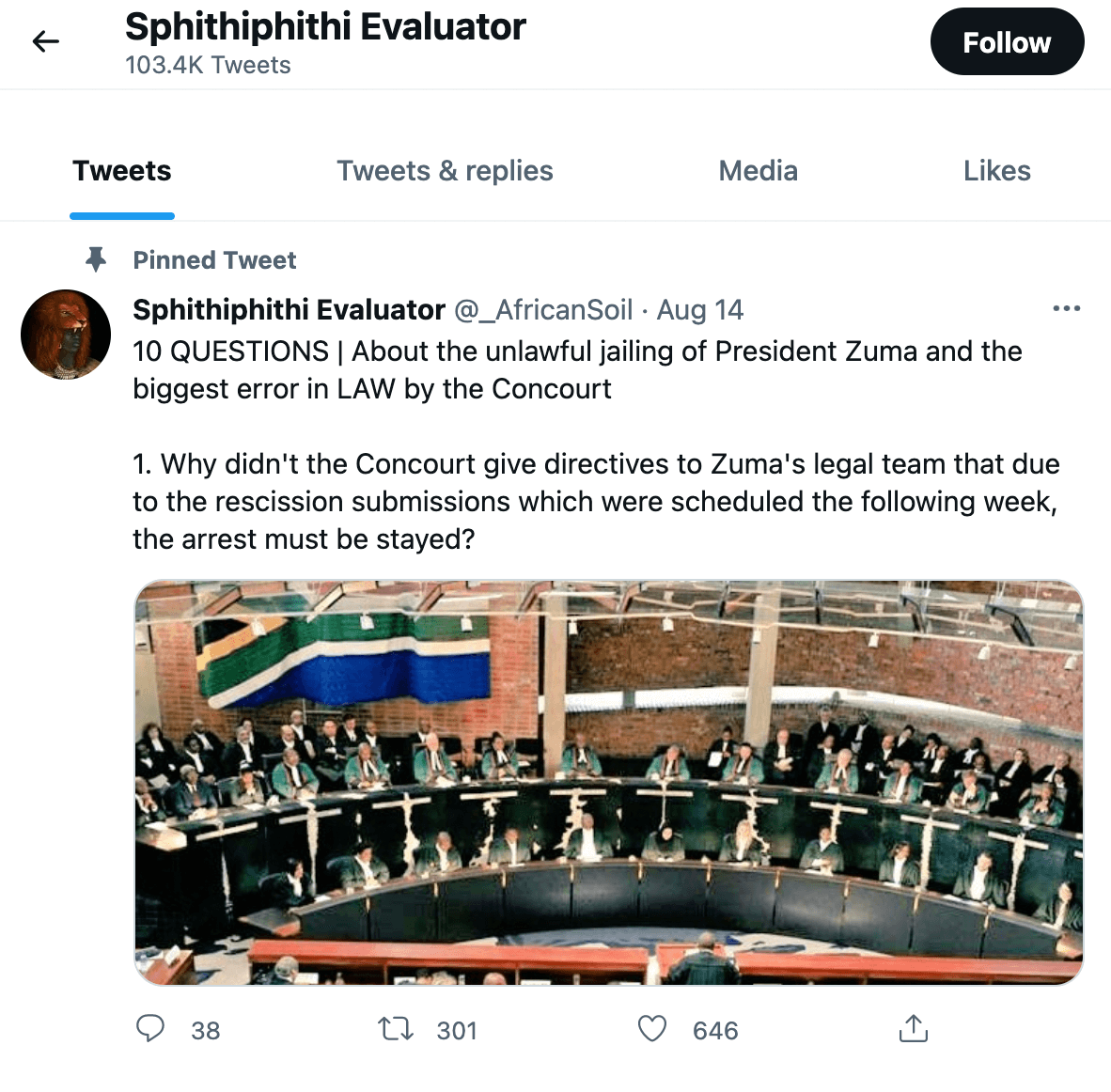 However her husband confirmed her arrest and said a statement would be issued by Thabo Mtsweni, the founder of civil society organisation Democracy in Action, which has been active in support of Public Protector Busisiwe Mkhwebane.

Majozi was granted bail of R3000 on condition that she surrender her passport and report to the nearest police station daily. The case was postponed to 18 October.

Disinformation researcher Jean le Roux has identified that the account originally used the handle @Zinhle_MJZ before changing its handle to @_AfricanSoil in 2018. Majozi’s second name is Zinhle, “MJZ” appears to be a reference to her surname.

Following Zuma’s incarceration on 7 July, the Sphithiphithi Evaluator (@_AfricanSoil) account began posting videos of what it described as “#FreeJacobZuma demonstrations“, led by truckers in Stanger, Kwazulu-Natal.

As unrest spiraled out of control in the province the account pushed the narrative that the unrest was a political protest aimed at freeing Zuma from jail. The account also sought to blame the violence and destruction on the judiciary, the media and the ANC faction under president Cyril Ramaphosa.

It is unclear whether prosecutors have direct evidence of Majozi calling for violence or whether they will rely on publicly-available Twitter posts. 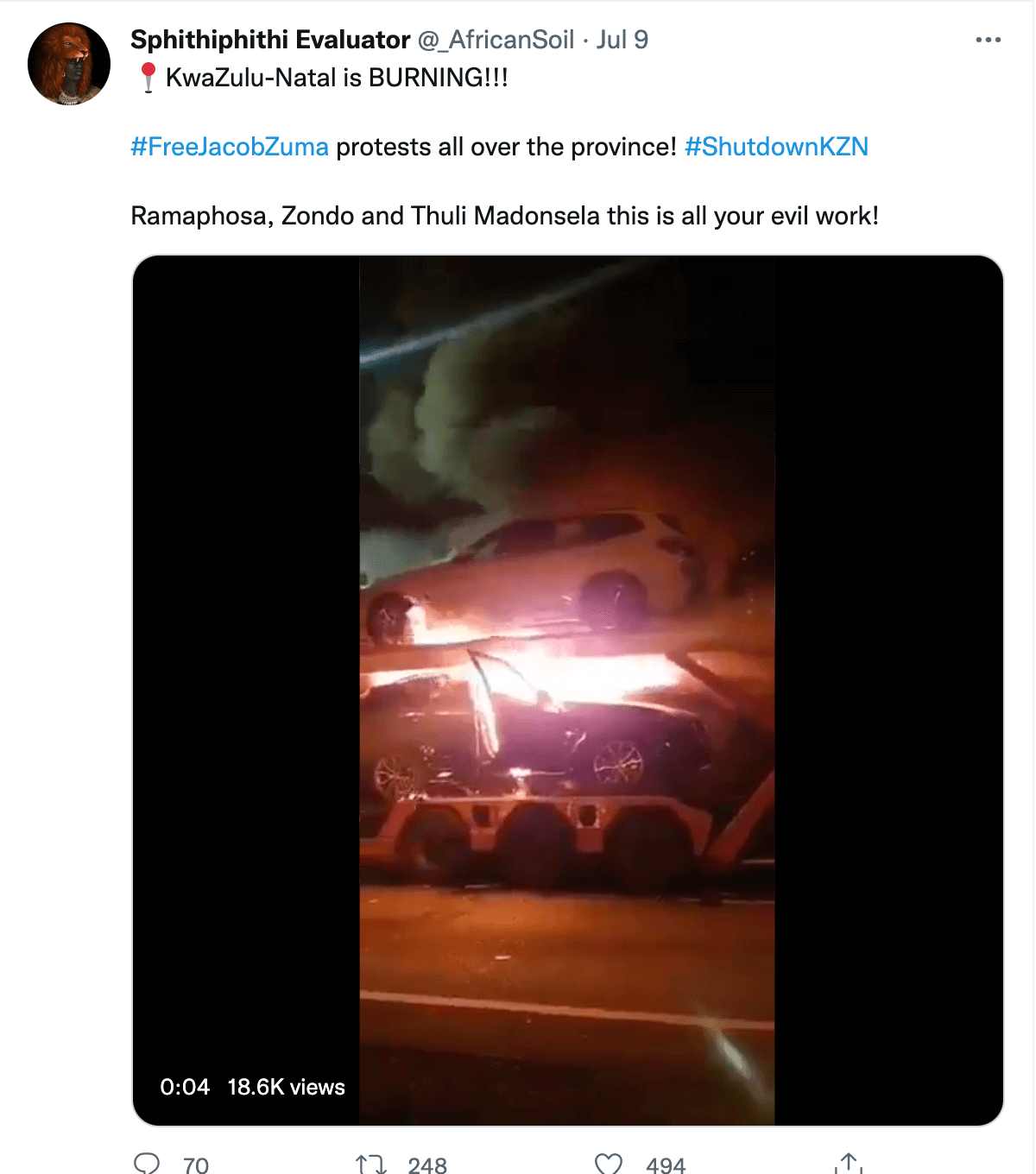 “The #FreeJacobZuma campaign is convinced that… the only reason why ‘Sphithipi Evaluator’ had been arrested is to intimidate her, and to try and silence her strident voice for justice for President Zuma, and overall for the economic transformation and justice,” he wrote.

Niehaus almost lashed out at Twitter for its “failure … to protect the identity of its users”.

Both Niehaus and the Sphithiphithi Evaluator account have been central voices in the RET faction that has weaponised social media for political ends.

AmaBhungane’s own investigation has highlighted how anonymous accounts and astroturf organisations have sought to manipulate public discourse, mobilizing support for the RET faction and creating the impression of mass grassroots for former president Zuma.

The Sphithiphithi Evaluator account has been a key protagonist in the RET universe, often hiding behind the account’s anonymity to launch vicious attacks on the former president’s perceived enemies.

Journalist Karyn Maughan was targeted in April last year by what appeared to be a well-organised Twitter storm using #KarynMaughanMustFall. 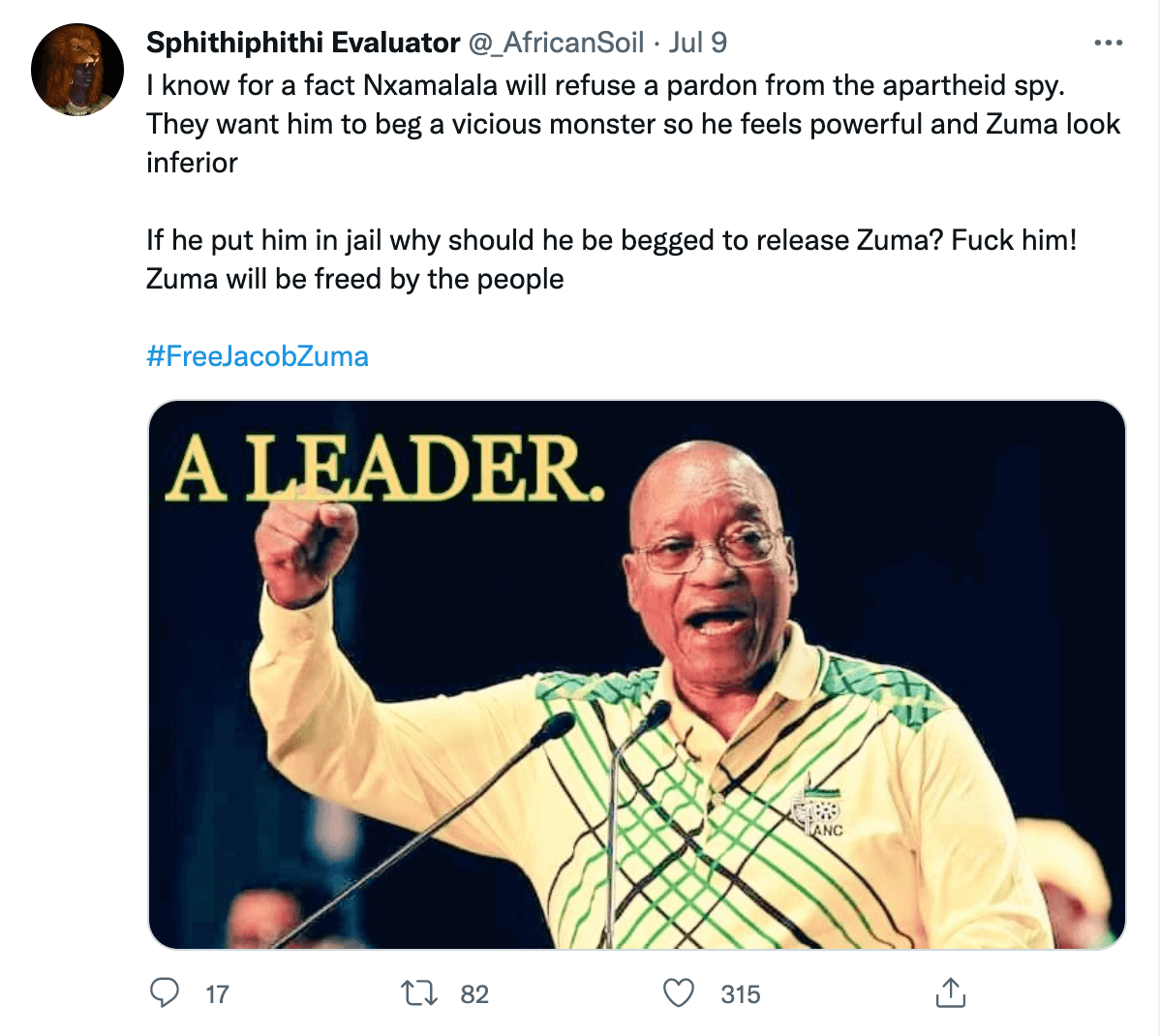 Amongst other things, the Sphithiphithi Evaluator account accused Maughan of being “a pathological liar”, a “racist psychopath”, and “a dangerous agent paid to character assassinate and attack black people”, at one point questioning: “Does she even have the proper papers [citizenship]?”

The attack on Maughan was seemingly provoked by her reporting on Zuma’s decision to fire his long-time lawyer, Daniel Mantsha.

The campaign appeared organized, with more than 15 000 tweets over ten days.

Know more?
Send us a tip off
clear

Dig into the evidence yourself.

Ready to dig in?